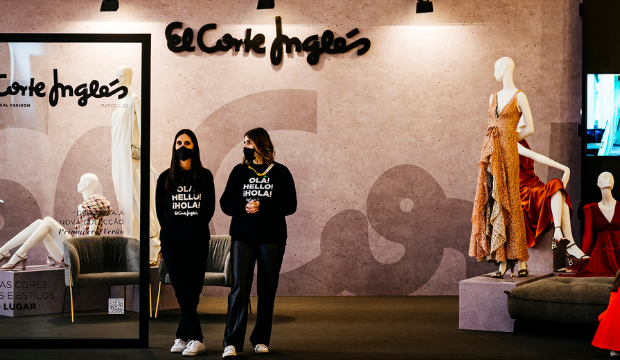 Portugal Fashion and El Corte Inglés will inaugurate, on April 6, a pop-up store with Portuguese designers. The department stores in Gaia/Porto are the main stage of an exclusive space dedicated to author fashion, which will feature, at its launch, clothes by designers Sophia Kah, Pé de Chumbo and Diogo Miranda. The partnership created by […]

Portugal Fashion and El Corte Inglés will inaugurate, on April 6, a pop-up store with Portuguese designers. The department stores in Gaia/Porto are the main stage of an exclusive space dedicated to author fashion, which will feature, at its launch, clothes by designers Sophia Kah, Pé de Chumbo and Diogo Miranda.

The partnership created by Portugal Fashion with the Spanish company began months before the March 2022 edition, when El Corte Inglês was present in the Gold Room with a brand activation, already opening space, and curiosity, for what would come next.

The idea of this dedicated corner is to give the designers of the Portugal Fashion platform a privileged commercial opportunity, in a reference space, also facilitating the access of designer fashion to the general public, through the many people who visit it regularly.

For the director of Portugal Fashion, Mónica Neto, the project that will now be put into practice aims to “publicize Portuguese fashion, complementing the promotional aspect and adding value, boosting sales and business development. El Corte Inglés is developing a strategy to promote the Portuguese offer, and has also made available its strategic know-how to accompany the designers involved in this pop up. We are mainly talking about specialized advice in their areas of expertise, namely sales, market response and marketing. Basically, it is intended that besides selling, these designers can also benefit from a commercial acceleration experience“.

Sophia Kah brand was born in 2011 by the hands of Ana Teixeira de Sousa. The designer was introduced to the art of garment making at an early age, from the moments lived in the textile factory founded by her grandmother, from whom she learned techniques that are older than memory, and methods so new that they are considered trade secrets. The brand’s pieces express a philosophy that includes contemporary luxury, timeless modernity, and a sense of elegant glamour. The importance of quality, expertise, and attention to detail are central to the Sophia Kah brand, which is shaping the silhouettes of the most influential women around the world, having already dressed the international singer Beyoncé. Unique and exclusive pieces will be on sale at the Gaia store.

Pé de Chumbo is a women’s clothing brand designed by Alexandra Oliveira. The designer, born in Guimarães, started her career in the fashion world at CITEX, Porto. She did several trainings in the textile area, gave training in Fashion Design at CENATEX and develops her own collection under the name “Pé de Chumbo” since 1995. She creates and manufactures 90% of the fabrics for the collections through her own handmade and exclusive process that she developed and has presence in stores in more than 30 countries. The brand imposes its characteristics in the conception of fabrics and knitwear, enhancing the details of each piece. In addition to regular participation in the editions of Portugal Fashion, it has international participations in Rome and Mozambique, and is a regular presence in the most prestigious events of commercial promotion of fashion sales in cities like Paris, Milan and New York.

Diogo Miranda began his professional career in 2007 and, since then, has presented all his collections in Portugal Fashion. Graduated in Fashion Design by CENATEX, he began by doing an internship in Seville, in Miguel Reyes’ Atelier. His pieces have traveled the world, through his striking campaigns, his presence in high-profile editorials and the public figures that parade them, such as the model Sara Sampaio, the Brazilian “it girl” Helena Bordon, the Indian actress Sonam Kapoor and the French model Caroline de Maigret. Her store and atelier are located in Felgueiras, where her current collections are present. He was awarded in 2015 the GQ Men Of The Year award, by the renowned men’s magazine GQ Portugal and, in that same year, he made his debut at Paris Fashion Week. In 2019 he was invited to be the head-designer of the Amorim Luxury Group’s “PAULA” brand.